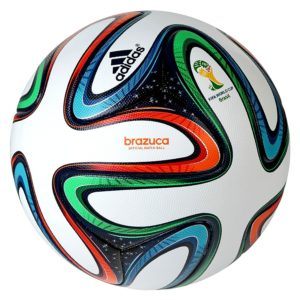 If you want to be the best at your game, then it helps to have the best equipment at your boot. That means having the best soccer ball in the world available to work on your game.

To be fair, any soccer ball that is used in a top flight professional league is going to be one of the best soccer balls in the world today. That means you can have an excellent training and playing experience by using any one of these soccer balls.

Each of these soccer balls has certain features which gives it a practice and play advantage. Each option creates movement when struck properly, allowing players to creating bending and knuckling action with a powerful shot. The pass is true with each of these balls as well. Keepers won’t mind using them either because the movement is still somewhat predictable as well.

The soccer ball that is the best in the world, however, is the ball that was used in the 2014 World Cup. That ball is the Adidas Brazuca.

Why Is the Adidas Brazuca the Best Soccer Ball in the World?

A soccer ball should be able to curve and knuckle when it is struck properly, but far too many of them tend to create movement on their own. In the past, soccer balls were created using 32 panels in order to make this effect become possible. The modern soccer ball, however, does not usually have the true hexagon panel design, so the movement of the ball is often unpredictable.

The Adidas Brazuca went through extensive aerodynamic testing in both wind and water tunnels to judge its flight stability. Handling of the Brazuca is closer to the traditional 32-panel ball as well, but without the extra weight on the foot that the older balls tended to provide.

What to Look For When Buying a World-Class Soccer Ball

If you’re going to be putting down $50, $100, or even more to purchase a world-class soccer ball, then it must have certain features. Otherwise, you’re just going to be wasting your money.

First and foremost, all world-class soccer balls should be FIFA-approved. FIFA has a series of rigorous testing methods that ensure a top quality playing experience. Everything from air retention to water absorption, flight to shape is evaluated. Almost every official match ball in every league and professional tournament play meets these standards.

The best soccer balls should also have a certain level of durability. The gloss on match balls can wear out quickly, which alters how it can be used during practice and play. Look at the best soccer ball reviews to determine which ones will hold up to the level of your current play needs.

The best soccer ball in the world isn’t going to make someone a great player, but it can help them work hard to become one. When you work with a soccer ball that has consistent flight and movement, you can begin to learn what you can do within the beautiful game.