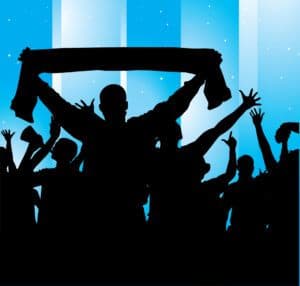 When you attend any organized soccer game or event, there is a good chance that you’re going to see soccer scarves around. Fans often hold their scarves up high during team songs or even the national anthem. They are seen as a way to express team spirit. Many supporter’s groups create their own scarves to wear out to the game.

The creation of the soccer scarf is actually one of necessity. Outside the United States, most soccer leagues playing over the winter months instead of Spring thru Fall. Sitting outside during a European winter can be more than a little cold. The scarf allows a fan to stay warm enough to enjoy the game.

The first soccer scarves began to appear in the UK in the early 1900s. These first team scarves would feature the colors of the team in an alternating fashion, creating a striping effect on the scarf. It is a style that is still popular to this day.

You grab an official US Soccer Scarf in this traditional design here: Click here to look at the price on Amazon and find the best deal.

Modern Soccer Scarves and What They Mean

This is all done in an effort to support the team. It’s also a way for fans to develop a certain camaraderie amongst themselves for the chanting and singing that happens throughout a match. It is evidence of personal support for the players that are on the field, but it is also evidence of a personal passion for the beautiful game.

The possibilities of a soccer scarf are endless. You can find designs today with player images on them, the traditional stripes, or team slogans. Fans can use them as part of their daily apparel, turn them into wall art, or collect them for other purposes.

If you love soccer, then there is a passion in there somewhere for the soccer scarf. They may be worn in winter and displayed in summer, but each scarf represents a passion for the team and a love for the beautiful game that is beyond compare.