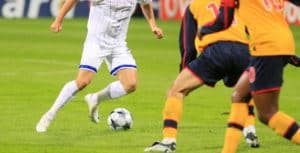 There’s nothing like strapping up your soccer cleats for game day. You wear those boots for practice too, but the feeling your shoe has on your foot feels different when you’re ready to play a meaningful game. There’s a certain bounce to your step. Your grip feels better. You know that you can do almost anything.

That’s probably how King Henry VIII felt when he put on his first pair of soccer cleats in the early 1500s. A shoemaker named Cornelius Johnson is credited with making the first cleats for soccer.

The modern soccer cleat is very different from those first options. The reason why cleats are called “boots” is because they actually used to be boots. Some versions strapped up to the mid-shin and offered 3-5 studs for extra grip. If a player couldn’t afford a pair of soccer cleats, it wasn’t unusual to wear their work boots for a game.

Soccer Shoes Began to Change the Game in the 1900s

Before 1900, many soccer cleats had metal studs on them. That gave players good traction, but likely felt terrible if you took a set to the shins, even if wearing a shin guard. After 1900, shoe manufacturers like Hummel and Valsport began creating equipment that was closer to an actual shoe. The first interchangeable studs began to appear around 1925.

Between 1940-1960, the modern soccer cleat began to develop. Manufacturing processes had improved, so a wider variety of materials became available. The shoes began to get lighter. Instead of metal studs on every cleat, there were options for plastic or rubber and they were interchangeable as well.

By 1970, leather soccer cleats were beginning to fade away, thanks to the durability and lightness of synthetic materials. By 1979, the Copa Mundial would be introduced by Adidas and it would change how players approached the game.

The 1980s and Beyond: More Manufacturers Than Ever

Just about every organization that is involved with the design and creation of shoes is also making soccer cleats these days. You’ll still find established names on the market, like Nike, Adidas, and Umbro out there. You’ll also find discount brands, such as Champion or And 1, also offering soccer cleats.

This is especially true for youth soccer cleats. Kids tend to be hard on their boots, but they also have feet that can grow quickly. No one wants to pay $100 for cleats that might be worn for half a season, but there still needs to be some quality to the cleat as well. Some brands offer some good value propositions.

Technology continues to advance for the modern soccer cleat. Every design offers performance, protection, and fashion, so each player can choose a boot that meets all of their needs very effectively.

As long as soccer will be played, there will be a certain need for soccer cleats. In the future, soccer boots and shoes will likely be stronger, lighter, and faster than ever before. Until then, the best soccer cleats for you will help with your skill development.

Are you looking for the Best Soccer Cleats – if so read our reviews.